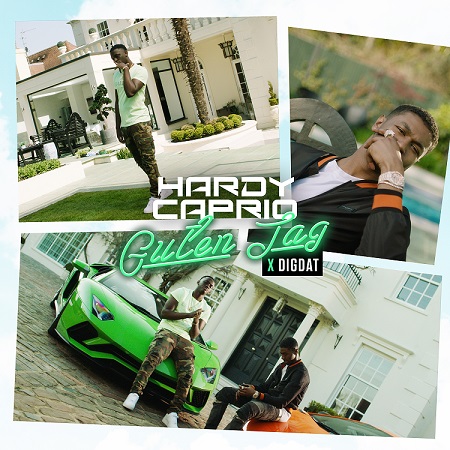 A collaboration with formidable London rapper DigDat 'Guten Tag' is the latest track to be taken from Hardy's highly anticipated debut album set for release this summer. The perfect recipe for a vibe filled summer the video was directed by previous collaborator Wowa and continues to tilt a hat at Hardy’s success. ?

Known as one of the game’s biggest hitters, DigDat's tales from the jailhouse and the roads combined his immersive imagery and witty wordplay has established his place in the UK scene. The remix of his song 'Air Force', featuring UK rap heavyweights Krept & Konan and K Trap, reached the Top 20 in the Official Singles Chart and made drill history in the process.

‘Guten Tag’ drops off the back of a stellar rise for Hardy Caprio. Most people would be absolutely delighted to either achieve a first-class degree in accountancy or to launch a thriving rap career. Incredibly Hardy Caprio did both at the same time.  After gatecrashing the UK rap scene, the charismatic young south Londoner has been on a vertical rise making waves and scoring chart hits with summery r'n'b-rap like Unsigned and Best Life, (both feat. One Acen), and the harder-edged dancefloor swagger of Rapper.  He has sold more than 1 million singles, sold out two national tours (many of which sold out within minutes of going on sale) and accomplished a gold and two silver records in one calendar year.

Earmarked by The Guardian as an artist who’s “on the edge of breakthrough” and GRM Daily as “a rapper that is going to blow” and described by The Independent as “poised to break into the mainstream”, Hardy has delivered on the hype, cementing his reputation as an upcoming British MC to watch.

Following the release of ‘Guten Tag' x DigDat, this year will see Hardy perform at a string of festivals over the summer and release his debut album.