I Could Get Used To This (The Remixes Vol 1) 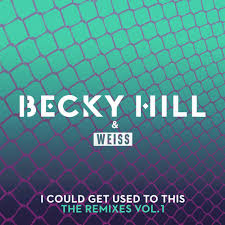 Chart-topping artist and songwriter Becky Hill releases her massive brand new single ‘I Could Get Used To This’, which sees her team up with one of UK house music’s biggest talents, Weiss today. The track follows the success of Hill’s huge hit with revered Detroit producer MK (Marc Kinchen) and BRIT nominee Jonas Blue on ‘Back & Forth’, now certified silver, and Weiss’s acclaimed UK top 20 house anthem ‘Feel My Needs’.

Exalting the comfort, security and certainty of a loving relationship, Hill’s instantly recognisable powerhouse vocals and songwriting are the perfect counterpoint to Weiss’s summery, uplifting beats as the London-based singer- song writer euphorically exclaims, “The way we talk, and all you give … the way I feel, the way we kiss, I could get used to this.”

Hill is best known for writing and singing soul-stirring tracks like ‘False Alarm’ with Matoma, UK #1 single ‘Gecko (Overdrive)’ with Oliver Heldens and certified Gold top ten hit ‘Afterglow’ with Wilkinson. Last year she released captivating new single ‘Sunrise In The East’, her first for new home Polydor Records. The track – written by Hill with Maverick Sabre and Lost Boy and produced by ADP – captured the exhilarating flourish of a new relationship, and drew praise from tastemakers including Popjustice, Scott Mills and Annie Mac who proclaimed Becky’s vocal  “One of the finest voices in pop music today.”

Upon launch, her most recent single the huge ‘Back & Forth’ was added to Radio 1, Capital FM, Kiss FM and Kiss Fresh with radio spins coming from the likes of Pete Tong and Annie Mac. The UK top 20 single has now gone gold with over 400K sales and 65 million streams. ‘Back & Forth’ marked the second time MK has teamed up with Becky, following the pair’s success with their 2016 Gold certified hit ‘Piece of Me’ (over 67 million streams to date).

With releases on Toolroom Records, Claude VonStroke’s Dirtybird and Jesse Rose’s Play It Down, Weiss embodies the spirit of old school and ‘90s era Chicago House, with a diverse range of musical influences from Metallica to Motown. To produce what would become a trove of instantly recognisable classics and unique, chunky club rollers.

Assisted by a generous amount of support from BBC Radio 1, his sounds caught the attention of industry heavyweights like Annie Mac, Groove Armada, Green Velvet, Loco Dice and Kenny Dope. Overwhelming support poured in from artists including Gorgon City, Eats Everything, Jax Jones, Duke Dumont, MK and Claude VonStroke, and through a wildly successful career punctuated by remixes for Kylie Minogue, Robyn, Calvin Harris and Claptone, Weiss found himself amongst House Music’s elite, sharing stages with legends including Todd Terry, Armand Van Helden and Pete Tong. His 2018 single ‘Feel My Needs’ netted an immense amount of critical acclaim, earned the #1 spot on 5 international music charts as well as a spot on the BBC Radio 1 A-list, and was voted best single of 2018 at last year’s DJ Mag awards

Becky is currently working on her forthcoming debut album with the likes of MNEK, MJ Cole and Two Inch Punch. Stay tuned for much more to