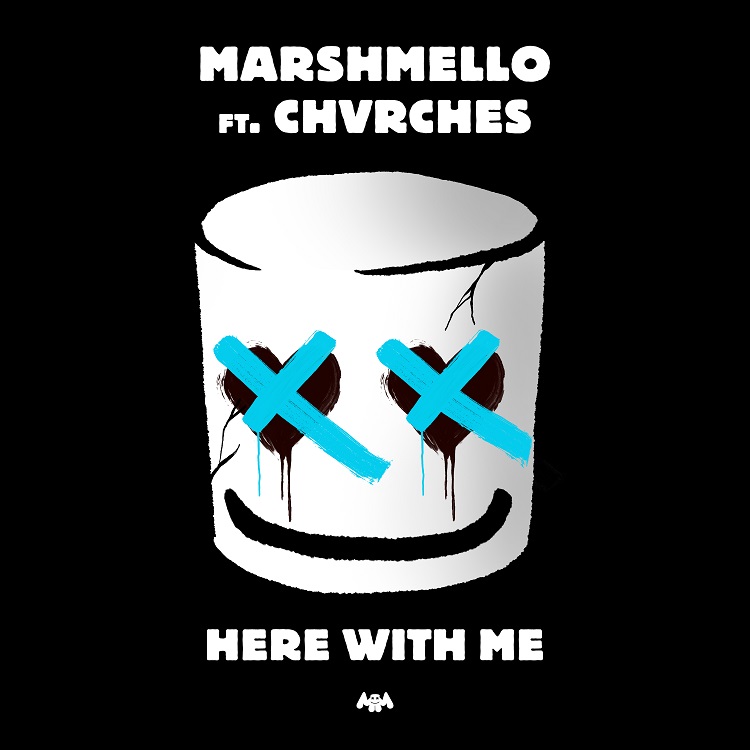 History-making international superstar Marshmello shares his new single “Here With Me” featuring CHVRCHES today. Get it HERE via Republic Records.

Amplifying excitement for more music, “Here With Me” upholds a tradition of chart-dominating smashes for Marshmello. With smash hit singles featuring collaborations with Migos, Khalid, Selena Gomez and Logic to name a few Mello recently joined forces with Bastille for “Happier.” The song not only toppled charts around the globe, but it also garnered a platinum certification from the RIAA, held #1 on the Top 40 Radio Airplay Chart, and conquered Billboard’s Dance/Electronic Streaming Chart and Dance/Electronic Digital Song Sales Chart. Not to mention, it’s closing in on one billion cumulative streams. Additionally, he teamed up with rising bass sensation Svdden Death for the recent “Sell Out.”

Beyond billions of streams and multiple gold and platinum certifications, Marshmello continues to make history at every turn. During 2019 alone, he played “the first-ever in-game concert” inside of Fortnite. Rolling Stone called Marshmello’s concert “revolutionary for the music industry” and Forbes dubbed it “a triumph” as millions of players tuned in to watch it at the game’s Pleasant Park. Marshmello also just landed a historic residency deal in Las Vegas for an exclusive two-year engagement at KAOS Dayclub and Nighclub at the Palms Casino Resort.  Marshmello has graced the cover of the coveted Forbes “30 Under 30” issue and received nods for six iHeartRadio Music Awards, including “Best New Pop Artist,” “Best Dance Artist,” and “Best Producer.” He took home “Best Electronic Artist” at both the 2018 American Music Awards and MTV EMA’s. He regularly occupies a spot in the Top 5 of Spotify’s “Most Listened To Artists in the World.” Additionally, he sells out dates in every corner of the globe.

CHVRCHES are Lauren Mayberry, Iain Cook and Martin Doherty. Formed in Glasgow in 2011, they released their breakout debut album, The Bones of What You Believe, in 2013, followed by 2015's critically acclaimed Every Open Eye. With the soaring success of their first two albums propelling CHVRCHES into new worlds of fame and acclaim, they released their third album, Love is Dead in 2018, and are currently on a massive world tour.